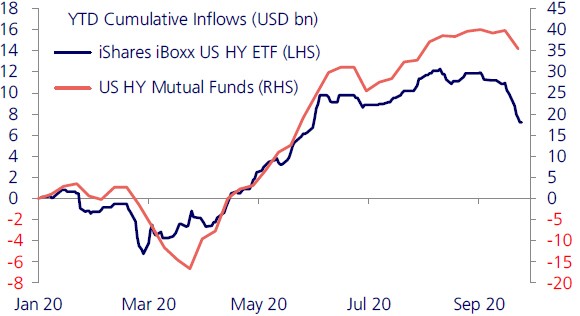 Credit markets that had been resilient so far amid the equity sell off saw volatility pick up at the end of last week. High yield indices saw spreads widening by around 50bps on the week, while investment grade spreads widened by 5 to 15bps, most of which occurred on Thursday and Friday. The risk off move seemed to be triggered by significant outflows from high yield ETFs, which have now unwound around a third of the cumulative inflows this year. That said, the broader picture is not as worrying. While ETFs can drive short-term price action, they are smaller in size than high yield funds, which have experienced a smaller percentage drop in cumulative inflows. Furthermore, investment grade funds continue to see solid inflows, while investment grade ETFs have suffered less than high yield ETFs. The key question that remains is the credibility of the Fed to backstop the market, although it has remained on the sidelines so far. While further volatility can be expected, especially as markets head into the earnings season and US elections, the medium-term picture for credit still remains constructive, given its relative attractiveness compared to government bonds, improving fundamentals and the liquidity glut, which was also seen in €174bn of new cheap bank loans (so called TLTROs) from the ECB.

US: Further headwinds for the S&P 500

Despite a strong rally on Friday the S&P 500  ended last week with a loss of 0.6%, the fourth negative weekly print in a row. The last time that happened was in August last year. The late week rebound was supported by a strong run for tech stocks, lifting the Nasdaq back into positive territory for the week. Reports on the economic front were mixed. The housing market continues to show strength with new home sales soaring to a 14-year high fuelled by pent-up demand and low mortgage rates. Markit’s PMI survey for September shows a small acceleration in manufacturing activity while momentum in the service sector has slowed somewhat with the PMI index levels at 53.5 and 54.6, respectively. Initial jobless claims remain stubbornly high at 870’000 last week, a tick higher than the week before. On a more positive note, continuing claims trended lower, although by less than what consensus expected. Finally, durable goods orders (ex transportation) slowed markedly, growing by just 0.4% in August, following a 3.2% rise in July.

I ncreasing virus cases, especially in France, led  to further lockdown measures last week. These will have some impact on economic activity but are much less severe than those of March and April. The risk is that further lockdown measures become necessary over the winter, which eventually do have a more severe impact on the economy, but we are not there yet. Although mixed, forward-looking surveys are still consistent with the recovery continuing into Q4, albeit at a weaker pace than in Q3. The Eurozone Composite PMI declined for a second month, to 50.1 in September, from 51.9 in August, led by a decline in services confidence, but this followed three large consecutive monthly increases. What’s more, other surveys released last week were more upbeat. The German ifo business climate indicator increased for a fifth consecutive month, whilst the French INSEE business confidence indicator also improved further in September. Eurozone consumer confidence also improved modestly. The upshot is that the recovery is likely to continue, though the virus situation will need careful monitoring.

Chancellor Sunak announced a new round of  fiscal stimulus to support the economy in the coming months. A crucial element is a new job support scheme that will come into place at the beginning of November, when the current furlough scheme ends, and is intended to run for six months. The government will subsidise wages of employees who are working at least a third of their usual pre-crisis hours. Unlike with the current support program however, employers will have to pay part of the salary for the unworked hours. The new program will help to mitigate the impact on the labour market as the current scheme is ending but we still expect unemployment to rise as not all employers will be able or willing to carry the additional cost. In addition to the new job support scheme, the Chancellor also announced an extension of the temporary VAT reduction for the hospitality sector until the end of March and extended four temporary loan schemes for businesses. Meanwhile, PMIs show that business activity has further improved in September, though at a slower pace than the month before.

Last week RBA Deputy Governor Guy Debelle highlighted a few possibilities for further monetary easing, including policy rate cuts, negative interest rates, an expansion of quantitative easing (QE) and FX interventions. Lowering the cash rate and the term funding facility rate appear to be the options most favoured by the RBA. Hence, we expect another policy rate cut to be delivered in the months ahead “without going into negative territory”. An expansion of QE on top of the current yield curve control is also a possibility, but the RBA seems to view it as a tool to support a well-functioning market rather than a key instrument of its monetary policy. Despite some setbacks caused by a second lockdown in Victoria, the recovery in activity remains intact, particularly in the labour market with the August unemployment rate falling from 7.5% to 6.8%. Preliminary retail sales in Victoria showed a 12.6 % MoM drop in August, holding up much better than the previous lockdown in April. Activity will probably pick up again in September as the lockdown has been eased.

European ABS: The recent surge in issuance is encouraging

With European ABS benefitting from strong  supply/demand technical, spreads outperformed broader credit markets last week. Over the past two weeks the primary European ABS market has been very active, and supply has included diverse collateral types and jurisdictions. Despite this surge in volume, demand remains strong as the investor base is broadening. However, YTD cumulative issuance volume remains far below previous years, in strong contrast to sales of corporate bonds. It is worth noting that most of the recent ABS issuers were specialised lenders or non-banks, which don’t have access to cheap central bank liquidity and need to tap financial markets for their funding. This is an encouraging development as credit provision to the European economy can continue even if banks retain tight lending standards, as recent surveys suggested. ABS spreads are likely to remain low given the demand/supply dynamics. Prime banks on the other hand, are either absent from secured issuance or only structuring retained deals to increase their collateral for ECB operations.