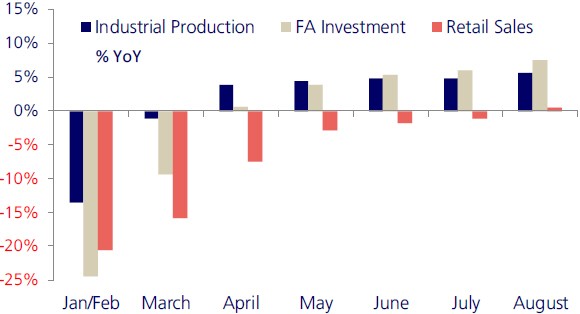 Following last week’s encouraging credit data, various economic indicators for August confirmed that China’s economy continues to recover steadily. All data came in stronger than consensus had expected. We applaud the fact that investment spending is now more dynamic for private firms, taking up the baton from state owned enterprises which had been driving the investment boom after the corona induced collapse in Q1. It seems that the focus on stronger credit support for SMEs is now paying off. Capital spending by manufacturing firms has spiked higher, while infrastructure spending remains brisk, though it is losing momentum. Property investment remains strong, with residential sales up 29% YoY, driven both by volumes and prices, even as the authorities continue to cool down property speculation. In 70 cities new home prices rose 0.56% MoM and were up 4.7% YoY. As the chart above illustrates, retail sales have moved above 2019 levels for the first time since the corona crisis erupted in China early this year. Strong demand for luxury goods and cars as well as online sales had been driving consumption so far, but now retail sales seem to be broadening. For example, sales of cosmetics and home appliances surged last month. In terms of services, domestic flights have recovered close to pre-crisis levels, while catering remains soft. Strong data for August suggest we are on track to reach our above-consensus growth forecast of 2.5% this year.

US: Rates to stay low until inflation reaches the Fed’s target

The S&P 500 suffered its third week in a row  with a negative performance, shedding 0.6%, the first such series since last autumn. The index is now roughly 8% below its recent record high. After a decent start into the week investors’ mood changed following a Fed meeting that was perceived as not providing enough new stimulus to reach the newly defined average inflation target. Although there were no immediate new measures, the FOMC’s commitment to keep current low interest rates on hold until inflation has risen to 2% and is on track to moderately exceed 2% for some time will have a profound impact on the Fed’s future reaction function. Meanwhile, economic data were mixed last week. While retail sales rose less than expected in August consumer sentiment, measured by the University of Michigan’s survey, rose to the highest since March, though it remains far below pre-crisis levels. Finally, the NAHB’s home builder index has reached a record high in September, pointing to a continued strong recovery in the housing market.

The ZEW, a survey of analysts and investors, is  a useful leading indicator of the real economy. Its 20-year high in September is consistent with a continued strong recovery. Indeed, Eurozone industrial production increased by 4.1% MoM in July, its third consecutive monthly increase, though the pace of growth is slowing. In May and June, output growth was 12.2% MoM and 9.5% MoM respectively. It is worth noting that the ZEW has often turned down when it has reached similar levels in the past, suggesting some caution near-term is warranted. Nevertheless, the medium-term prospects once we emerge from the COVID-19 crisis are still encouraging in our view, given recent positive policy developments. Last week, for example, the European Commission provided more details regarding the EUR 750bn Next Generation EU funds. It confirmed the strong green emphasis of the programme, with a plan to issue around 225bn in green bonds and for around one-third of all spending to be on projects that promote sustainability as well as boosting the economy.

UK: The BoE explores the potential use of negative rates

Labour market data continue to be distorted  by the government’s job retention program with the reported unemployment rate of 4.1% for July not reflecting the full damage done to the economy by the COVID-19 crisis. Hours worked remain significantly below pre-crisis levels and the looming end of the government’s support program weighs on the outlook. As expected, inflation slowed down in August to a mere 0.2% YoY, dragged down by VAT cuts and the ‘Eat Out to Help Out’ program. Retail sales recovered further in August, rising 0.6% MoM, lifting the annual rate to 4.3%, the highest since April 2019. No surprises came from the BoE’s latest meeting with the current policy kept on hold. The MPC raised its growth expectation for the current quarter but continues to see risks later this year from COVID-19 as well as an unorderly Brexit. Finally, the BoE announced that it will explore the logistics around negative rates, leaving the door open to add them to their monetary toolkit.

Yoshihide Suga won the LDP Presidential elections, as expected, and has taken over as Japan’s new prime minister. Eight of the twenty ministers in his new Cabinet have kept their prior positions, particularly those related to economic policies, which reflects Suga’s intent to stick to ‘Abenomics’. He has also kept a balance amongst the LDP factions represented in ministerial positions. Former Foreign and Defence Minister Taro Kono is taking over the Ministry of Administrative and Regulatory Reform, one of the functions PM Suga is emphasising more than Abe did. We believe that the Minister of Digitalisation, Takuya Hirai, will also be in focus, as the corona crisis has revealed that both the public sector and some companies need to advance in that field. We note that only two female ministers have been appointed, which somehow does not reflect the progress Japan has made in the field of ‘womenomics’. The new Cabinet received a high public approval rating according to the latest newspaper surveys, which is surprising considering that the ‘old guard’, with its deteriorating ratings before Abe’s resignation, still dominates.

Credit markets continued their resilience last week despite unsettled equities. Strong investor demand is clearly being seen in the primary markets. September issuance is shaping up to be quite strong in both the US and Europe, the latter seeing some corporate green bonds last week. That said, the supply calendar could lighten up going into the election months of October and November, while investors still have cash to be invested amid continuing solid inflows. The CDS index will roll into a new series today and notably, the US CDX IG index spread will be around 20bps tighter as fallen angels such as Ford and Macys will be excluded. There has been an uptick in acquisition financing, but this doesn’t change our view that generally managements will remain conservative and responsible around capital conservation. Indeed, debt for acquisition financing is still a low percentage of supply but is an area to watch. Worth monitoring also is the M&A activity that seems to be picking up in the European banking sector and US-China tensions that are impacting some bank stocks and markets this morning.