China’s PMIs show economic activity is back to normal 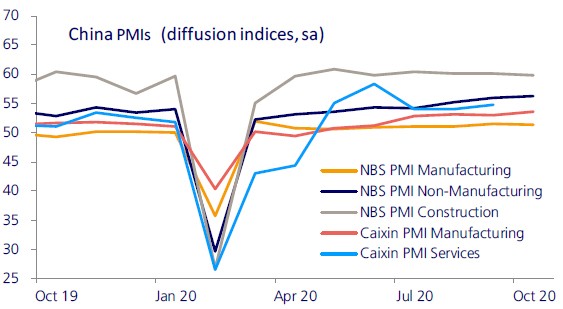 China’s PMI releases must be treated with some caution as they are distorted by the extended holiday period early October, but the general picture remains encouraging. The Caixin Manufacturing PMI, which puts a higher weight on private SMEs versus major state-owned companies, surged to 53.6, close to a ten-year high. A recovery in the services component shifted the NBS Non-Manufacturing PMI up by 0.3 points to 56.2, while the construction PMI retreated but remains high. From a more long-term perspective it is worth focussing on government policies. At the 5th Plenary Session of the 19th Central Committee of the Communist Party of China the 14th Five-Year Plan as well as the Vision 2035 plan were discussed. Further details will be released this week, but the communique already gives us someinsights into a few major topics. Self-sufficiency is a significant theme, and we believe that innovation and technology will be at the core along with substantial investments in education and the semiconductor industry. Modernisation of the defence sector and decarbonisation are other major investment targets. Opening the economy to foreign competition and qualified talents is the other side of the ‘dual circulation’ coin, a theory formulated by President Xi. Finally, it is worth noting that no specific GDP growth target has been set. Instead, China aspires to achieve the GDP per capita level of medium developed countries by 2035.

US: The economy rebounds by arecord amount in Q3

The S&P 500 suffered its worst week since March, falling by 5.6%, as investors focussed more on a relatively cautious business outlook amidst a significant rise in new infections rather than another batch of solid earnings surprises. The first estimate of GDP for the third quarter shows the impressive rebound following the worst slump in decades. The economy grew at an annualized rate of33.1% (after falling 31.4% in Q2), driven by consumption expenditures increasing more than 40% and investment soaring by more than 80%. The massive rebound undoes a lot of economic damage caused by the pandemic, but it still leaves GDP 2.9% lower than in the same quarter a year ago. Other data published last week were more mixed. Durable goods orders grew by 1.9% MoM in September, indicating a decent start into Q4. On the other hand, consumer confidence receded in October, driven by a more cautious outlook, while the perception of the present situation has further improved though it remains far below pre-crisis levels.

After weeks of steadily increasing lock downmeasures, Germany and France took steps that were closer to those introduced in March and April. France saw the most severe measures introduced, with all non-essential shops to be closed for a month as the curfew remained in place with people asked to work from home where possible. In Germany, the measures focused more on the closure of leisure and entertainment venues, such asbars, cafes, gyms and cinemas. In both France and Germany, in contrast to earlier this year, schools will remain open. Nevertheless, the measures are severe and will curtail economic activity substantially in November. The Euro Stoxx 50 was down 7.5% last week and a stabilisation in risk assets could require evidence that the extra lockdown measuresare having an impact in terms of flattening the virus curve. Meanwhile, the ECB gave a strong indication last week that it is preparing an increase in monetary stimulus to be announced at the December 10 meeting. We expect a substantial increase in the Euro 1.35 trillion PEPP as well as other measures to be announced.

PM Suga held his first public policy speech. We believe that his focus on a “Green Society”, digitalisation of the economy and regulatory reforms is worth highlighting. Meanwhile, the Bank of Japan kept policy rates and monetary targets unchanged but lowered its GDP growth and inflation outlook for this fiscal year, while marginally increasing it for the following two fiscal years. It was abusy week in terms of releases of economic indicators. Focussing on the manufacturing sector, where industrial production data for September came in better than consensus had expected, companies expect brisk production for October and November. Retail sales have already made their way back not only to pre pandemic, but even pre-consumption-tax-hikelevels from early 2019. However, apparel sales and services consumption need more time to recover. Consumer confidence edged higher in October but still has some way to go toreach early 2019 levels, while department stores keep suffering from the lack of Asian, particularly Chinese tourists. Meanwhile, the‘Go-To’ campaign pushed Tokyo’s CPI back into negative territory in October.

It was a torrid week for equites, with the VIX volatility measure hitting the highest level since June. The MSCI World Index broke through its 100-day moving average to close the week down over 5%, in a broad-based sell-off. Concerns about increasing lockdowns in a bid to contain spiking COVID infections in much of Europe and the US undermined confidence in the final week before the US election. While Biden has held his lead in the polls, investors are concerned that this does not preclude a contested outcome and the chaos this could bring. Even another week of robust earnings in the US failed to buoy sentiment, with 85% of companies having now beaten expectations by just over 19%. Last week saw the key tech names of Amazon, Facebook, Alphabet (Google) and Apple surpassing expectations, but acautionary tone and a sharp fall in iPhone revenues, down 21%, failed to turn sentiment. We suspect that the shakedown for stocks may be close to running its course, with the election on Tuesday and news on vaccinations and additional stimulus in the coming weeks offering potential for recovery.

Corporate bonds were resilient once again last week amid a broad-based sell-off in stocks and a surge in implied volatility, driven by hedging ahead of US elections and fresh restrictions in France and Germany to check the rise in coronavirus infections. While the MSCI World Index declined by around 5% on the week, investment grade credit spreads in the US and Europe widened by only 2bps and 5bps respectively. High yield markets were more sensitive to the negative investor sentiment, as significant outflows were reported from US high yield funds and ETFs. Strong demand was seen in the primary markets, although issuers had to grant new issue concessions to investors. The ECB’s Bank Lending Survey showed bank lending conditions tightened in Q3 are expected toremain so in Q4. That said, investment grade companies can fund in bond markets at very favourable conditions with the ECB likely to provide further stimulus at its December meeting.  All in all, we expect the strong supply/demand technicals to support credit markets although risks and uncertainty around the coronavirus remain high.