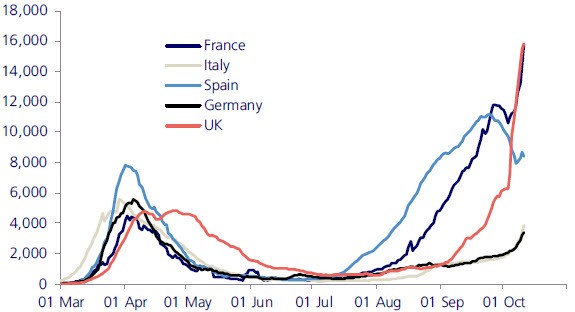 Unfortunately, virus cases have increased sharply in recent weeks in many European countries, and as a result, additional lockdown restrictions are being announced. In France, bars have been closed in many major cities including Paris, while the Spanish government declared a state of emergency for the Madrid region. In the UK, an announcement is expected today on forthcoming lockdown measures. It is difficult to compare this second wave to the first in terms of magnitude as testing has increased significantly and valuable experience in treating the virus has also been gained. So far, hospitalisation and fatality numbers are much lower than during the first wave, and governments have resisted imposing full lockdowns on their economies comparable to earlier this year. Indeed, activity continues to hold up, with forward-looking surveys in most European countries still pointing to growth. The final Composite PMI for the Eurozone came in above the 50 expansion/contraction mark at 50.4 in September. Admittedly, Spain’s Composite PMI did fall sharply, to 44.3 in September, but Spain also offers a glimmer of hope with new virus cases now diminishing. Equity markets have been resilient, as investors appear to be assuming that this second wave will be less severe in terms of economic impact. While we agree, the next few weeks will be critical to monitor. Continued monetary and fiscal stimulus will also be needed to support the economy until the virus situation improves.

Bonds: US Treasury yields rise, but elevated uncertainty limits further upside in the near term

US related factors pushed Treasury yields higher last week, as the President Trump’s health improved and hopes that a last-minute fiscal stimulus deal would still be reached. The rise in yields was mainly driven by longer maturities, leading to a modestly steeper curve. That noted, the 2/10yr spread remains very tight compared to previous economic cycles and continues to lag behind the 10/30yr spread, likely reflecting the influence of Fed policy. US inflation expectations also rebounded, leaving real yields unchanged and close to historical lows. The 10yr yield closed at a four-month high of 0.79% mid week, but failed to rise above 0.8%. We suspect further upside to Treasury yields is limited near term, as uncertainty will remain elevated going into the US election and as infection rates are rising again while the pace of improvement in economic activity is moderating. Bond yields in other major markets also failed to catch up with Treasury yields, partly reflecting the virus situation.

US ABS Credit: Signs of a lift-off emerge

I ssuance of US asset-backed securities (ABS) backed by consumer loans has been showing signs of a strong rebound in the past few weeks. September recorded the highest monthly volume in 2020, which was 26% higher than in September 2019. While the YTD volume is still 20% lower than in 2019, the pipeline of deals is growing. Auto ABS issuance is particularly strong, boosted by a recovery in vehicle sales. ABS credit spreads have also tightened and are now back to January levels. Notably, the new Fed TALF (Term Asset-Backed Securities Loan Facility) has attracted less than USD 4 billion of cumulative loan demand since March, less than a tenth of the 2008 TALF volume. Demand has been virtually non-existent and largely restricted to CMBS and small business loans, as issuers prefer financing from credit markets. We expect this to continue until the end of the year as public markets are cheaper for issuers. It is encouraging to see strong investor demand supporting ABS issuance, which should help to supply credit to households and strengthen the economic recovery.

The 2020-21 Budget released last week revealed Australia’s fiscal plan to heal and rejuvenate the economy post COVID-19. Various measures were announced ranging from income tax cuts to policy incentives intended to boost business investment and technology development, as well as the introduction of the JobMaker Hiring Credit program, which incentivises firms to hire young job seekers. Besides measures with immediate healing effects, others which cut red tape, boost infrastructure spending, and upskill the workforce will probably help boost the country’s productivity in the long haul. The total fiscal stimulus for 2020-21 was forecasted to be around 10% of GDP, one of the largest fiscal packages among developed economies (DMs), resulting in a budget deficit of about 11% of GDP. To finance this, net debt was projected to double by 2023-24, reaching around 44% of GDP. Despite the large increase, Australia’s public debt is still low among DMs, and ultra-low interest rates will keep the government’s interest servicing costs at a manageable level.

The Indonesian parliament passed an important omnibus bill creating major labour and investment reforms, which have been discussed for years. The reforms include reducing the maximum compensation from 32 months to 19 months of salary when employers lay off workers, shortening the list of restricted sectors to foreign investors and cutting red tape regarding business licensing and tax regulations. Despite no immediate boost to the economy given that Indonesia is still struggling to contain the pandemic, these reforms will yield great benefits in the long term. Indonesia has long been considered a less attractive destination for foreign investment given its extremely rigid labour laws, which make it very expensive to hire and fire workers, and tight restrictions on foreign investors in certain industries. With international firms seeking new destinations to shift their supply chains away from China, these reforms, if done effectively, will help Indonesia benefit greatly from foreign direct investment inflows.

Latam: Inflation accelerates in Brazil and Chile, but no inflationary risks are expected

In Brazil, headline inflation accelerated in September from 2.44% to 3.14% YoY, above market expectation, mainly driven by increased goods prices, particularly in food and durable goods. However, inflation is still below the inflation target. The passthrough of currency depreciation, adverse weather conditions, and the impact of government transfers could explain this result. Also, for the first time during the year, core inflation accelerated. In Chile, headline inflation surprised by increased 0.6% MoM, from 2.4% to 3.1% YoY. The picked up in inflation was mainly attributable to tradable goods. The rise in prices could be explained by a combination of growth in disposable income after the withdrawal of 10% of pension savings and the lagged effect of currency depreciation. We estimate that the acceleration is temporary in both countries and should not change the Central Banks’ forward guidance. Finally, in Mexico, after the acceleration seen in the previous months, headline inflation fell from 4.05% to 4.01%, driven by lower non-core inflation.