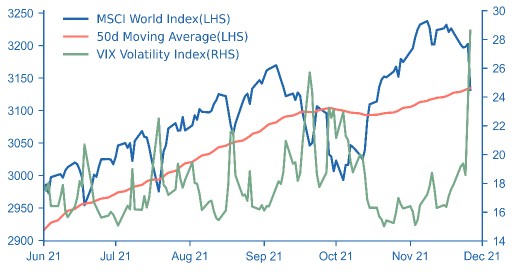 In the holiday-shortened week in the US, investors were caught off guard as news broke of a new Covid variant. Although European equity markets were starting to reflect the rising Delta cases in the region, the news of a more virulent strain pulled US stocks from their highs and sent global equities down 2.7% on the week. Oil was badly impacted, off 13%, and is now down 20% from recent October highs. Bonds were the beneficiaries as safe havens were back in vogue, having been under pressure before the news broke. The rally was modest however, with 10yr Treasury yields down 16bp on Friday at 1.47%, and 10yr Bund yields almost unchanged over the week at -0.34%. While some of last week’s equity moves were likely amplified by lower holiday trading volumes in the US, they were still fairly modest, with the MSCI World Index only back to its 50-day moving average. Although equities remain our favoured asset class in the medium term, trying to predict the market implications of Omicron in the short term is hazardous and we believe caution is warranted. Investors had become positioned for a short squeeze higher into the year end, which implies outflows from equities are possible unless there is compelling data around the virus in coming days.

Credit: Softening morphs into a sell-off in Europe

Credit can often lead price action in other markets. As we had been writing over the last few weeks, credit markets had been softening since October, despite an upbeat tone in stocks. News of the new Covid variant Omicron drove spreads sharply wider on Friday amid a tumble in Oil prices, as the new variant injected fresh uncertainty into investors’ minds. European credit, that had already been lagging other credit markets, bore the brunt of the sell-off, significantly underperforming US credit and CDS indices. Supply has been heavy over the last few weeks and a push by issuers to get deals printed before the year end lull sets in, can further exacerbate volatility. As further details are awaited on the Omicron variant and its potential impact on growth and policy, it seems likely that volatility will persist for some time. The near-term picture for credit markets seems to have become more cloudy, although in the mid to long term spreads should eventually recover, given still improving balance sheets and a backdrop of historically low bond yields.

US: Jerome Powell is renominated as chairman of the Fed

Accelerating inflation and a tight labour market are likely to accelerate the Fed’s tapering path. By renominating Jerome Powell for a second term as chairman of the Fed, President Biden signals a welcome continuity and avoids injecting uncertainty at a challenging time for the central bank. The latest PMI surveys show that business activity is keeping up a robust pace in November. Momentum picked up in the manufacturing sector while the rate of expansion in services slowed somewhat. New business growth remains buoyant though labour and material shortages continue to weigh on the private sector, pushing up input costs. Meanwhile, consumer spending recovers further from the soft patch observed over the summer months. Personal spending rose 1.3% MoM in October, the highest rate since March when stimulus checks added additional impetus. The PCE Core inflation measure accelerated to 4.1% YoY in October, a three-decade high, fuelled by rapid shelter inflation. Reflecting the current tightness of the labour market, weekly initial jobless claims fell to 199’000, the lowest since 1969.

In Germany, the SPD, Greens and FDP agreed  the terms of their coalition deal. They agreed to accelerate the green transition, for example by phasing out coal use to achieve a target of 80% renewable energy production by 2030. They also said that they would reapply the German “debt brake” fiscal rule from 2023. This had been temporarily suspended due to the Covid crisis. Meanwhile, data were mixed last week. The German ifo Business Climate Index fell more than expected, to 96.5 in November from 97.7 in October. However, the flash Eurozone PMIs were stronger than expected, with the composite PMI increasing to 55.8 from 54.2, after three consecutive months of decline. Unfortunately, this is to some extent old news as the new Omicron variant worried investors on Friday. The situation needs careful monitoring, and it is too early to say what will be the impact with any certainty, but it is worth noting that manufacturers have said that vaccines are adaptable, and businesses have become more adept at managing the effects of lockdown restrictions.

Japan’s November PMIs edged higher, as the  auto sector recovers from a relaxation of supply bottlenecks and consumers are cautiously adapting to a significant improvement in the Covid situation. The latter is also confirmed by various consumption related indicators for October and November, even though car sales are still lacklustre. Exports remain brisk across the region, as export related data for Taiwan, South Korea, Hong Kong and Thailand reveal. In South Korea, 20day November exports suggest that a new record is in the offing once the full data set for November becomes available later this week. It is interesting to note that shipbuilding and petroleum related products have taken over from semiconductors, mobile phones and other electronic products as being the main driver of the brilliant export performance. In China October industrial profits have surged, mainly benefitting from record high producer price inflation. Finally, the Bank of Korea hiked its policy rate by 25bps to 1%, as widely expected.

LatAm: Omicron is not the only driver for financial markets

The Mexican President negatively surprised the market by reconsidering the nomination of former Finance Minister Arturo Herrera as the next Central Bank governor. In his place, he nominated Victoria Rodriguez, undersecretary of expenditures at the Ministry of Finance, who is not very experienced in Monetary Policy. The Mexican peso depreciated 5% during the week, making it the second-worst performing currency in the world. AMLO justified his decision on the key role Rodríguez has played in his austerity policy, pointing out he will respect the autonomy of Banxico and its mandate. In Chile, the IPSA index rose by 5% during the week, spurred by the results of the Senate election. The government coalition and the right-wing party increased their representation to reach 50% of the Senators. Consequently, this should reduce the tail risks of structural changes and force the presidential candidates to moderate their agendas to ensure they have the centre’s support. However, some uncertainty would likely continue as the new constitution, governability, and reforms worry the markets.

This publication has been prepared by Zurich Insurance Group Ltd and the opinions expressed therein are those of Zurich Insurance Group Ltd as of the date of writing and are subject to change without notice.
This publication has been produced solely for informational purposes. The analysis contained and opinions expressed herein are based on numerous assumptions concerning anticipated results that are inherently subject to significant economic, competitive, and other uncertainties and contingencies. Different assumptions could result in materially different conclusions. All information contained in this publication have been compiled and obtained from sources believed to be reliable and credible but no representation or warranty, express or implied, is made by Zurich Insurance Group Ltd or any of its subsidiaries (the ‘Group’) as to their accuracy or completeness.
Opinions expressed and analyses contained herein might differ from or be contrary to those expressed by other Group functions or contained in other documents of the Group, as a result of using different assumptions and/or criteria.
The Group may buy, sell, cover or otherwise change the nature, form or amount of its investments, including any investments identified in this publication, without further notice for any reason.
This publication is not intended to be legal, underwriting, financial investment or any other type of professional advice. No content in this publication constitutes a recommendation that any particular investment, security, transaction or investment strategy is suitable for any specific person. The content in this publication is not designed to meet any one’s personal situation. The Group hereby disclaims any duty to update any information in this publication.
Persons requiring advice should consult an independent adviser (the Group does not provide investment or personalized advice).
The Group disclaims any and all liability whatsoever resulting from the use of or reliance upon publication. Certain statements in this publication are forward-looking statements, including, but not limited to, statements that are predictions of or indicate future events, trends, plans, developments or objectives. Undue reliance should not be placed on such statements because, by their nature, they are subject to known and unknown risks and uncertainties and can be affected by other factors that could cause actual results, developments and plans and objectives to differ materially from those expressed or implied in the forward-looking statements.
The subject matter of this publication is also not tied to any specific insurance product nor will it ensure coverage under any insurance policy.
This publication may not be reproduced either in whole, or in part, without prior written permission of Zurich Insurance Group Ltd, Mythenquai 2, 8002 Zurich, Switzerland. Neither Zurich Insurance Group Ltd nor any of its subsidiaries accept liability for any loss arising from the use or distribution of publication. This publication is for distribution only under such circumstances as may be permitted by applicable law and regulations. This publication does not constitute an offer or an invitation for the sale or purchase of securities in any jurisdiction.