US inflation has consistently failed to match target 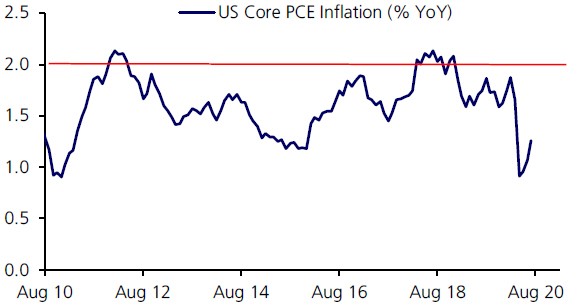 The fifth consecutive week of gains for the S&P 500 saw the index extend its record levels by a further 3.3%. The move was not without substance, driven by a plethora of better than expected economic releases and the much-anticipated policy review by the Fed, which implied lower interest rates for even longer. On the economic side, key indicators show an economy firmly in recovery mode, at least in July. While the poor Q2 GDP reading was revised a little higher, new home sales surged last month, while durable goods orders jumped 11.2%. Initial jobless claims were stuck around the one million mark, but continuing claims are in steady decline and personal income and spending for July surprised positively. Consumers have clearly benefitted from the fiscal support mechanisms that are boosting incomes and allowing spending, however, as programs conclude it will be critical that congress quickly agrees on further measures to keep the recovery on track. While we expect the pace of the rebound to slow, the policy changes by the Fed are constructive, with an average inflation rate of 2% now targeted. As the chart shows, the point target has proven elusive over the past 10 years. The intent now is to “achieve inflation moderately above 2% for some time”. While we question how achievable this will be, it implies interest rates will be suppressed even once growth and inflation show upward momentum.

Bonds: A muted response to the anticipated Fed announcement

The response of bond markets to the Fed’s announcement of the average inflation targeting (AIT) framework was muted. The US 10yr yield ended the week just a few bps higher than before the announcement, though it continued its grind higher since early August — up by 10bps vs a week ago. The modest rise in yields has been supported by strong macro data and has led to a renewed steepening of the curve, which is consistent with the ongoing recovery. Inflation expectations edged higher, rising above their pre-crisis levels, but the shortfall compared to what would be consistent with the 2% AIT remains large.

Indeed, with inflation set to be weighed down by a weak labour market, achieving the Fed’s 2% target over the near to medium term will be a challenge. And as the policy shift is iterative, rather than a change in regime, bond market dynamics are unlikely to shift markedly; yields should remain capped in a low growth/high debt environment. Given recent rebound in yields, further upside from these levels is therefore likely to be limited.

Survey data released last week showed further improvement in August, suggesting that our view was correct that the fall in the Eurozone Composite PMI for August (which was released earlier this month) was not something to be too concerned about. The European Commission’s Economic Sentiment Indicator increased to 87.7 in August from 82.4 in July. The German ifo business climate indicator picked up to 92.6 from 90.4, driven by strong gains in the current conditions component in particular. The German government also announced further support for its economy last week, extending the short-time working initiative until the end of 2021, and extending protections for companies from bankruptcy. With a lot of policy support, the principle risk to the recovery remains a surge in new virus cases. The situation requires careful monitoring, but so far hospitalisation and death rates have remained much lower than the previous peak in the pandemic in March/April. Finally, the Euro Stoxx 50 index gained almost another 2% last week, supported by continued dovish comments by central bankers.

Switzerland: GDP slumps in Q2 but a steep recovery is underway

GDP fell by 8.2% in Q2, led by weak services, a slump in business investment and a severe contraction in services; value add in accommodation and food services and transport and communication was down by over 50% and 20% respectively. This is the deepest GDP decline on record, but the drawdown was relatively mild compared to most other regions. Resilience partly reflected the highly diversified economy, with Pharma providing an offset to weakness elsewhere. Looking forward, recent data have been strong. The KOF leading indicator surged to a 10-year high in August, boosted by foreign demand and manufacturing activity while the hospitality sector saw a surge in domestic ‘staycation’ tourism. Swiss shops are also benefitting from less cross-border shopping, with retail sales volumes now up over 4%compared to a year ago. A V-shaped recovery is underway, and the Swiss economy has once again proven that it relatively resilience in the face of adverse shocks.

PM Abe, the longest serving prime minister in  Japan’s history, has resigned due to health reasons, a year before his term would have ended. The LDP is likely to elect a successor in two weeks’ time who will serve as prime minister for the remainder of Abe’s term. Several candidates are already lining up. Major policy changes are unlikely in our view, particularly as far as fiscal and monetary policy is concerned. Policy continuity is expected to prevail as long as the pandemic has its grip on the country. Equity investors reacted nervously, but overall the Topix remains unchanged from Thursday last week. Industrial production recovered more than consensus had expected in July but is still down 16.1% YoY. Retail sales retreated a bit following their spike in June, while consumer confidence remained roughly stable in August. Meanwhile, housing starts and construction orders remained weak in July. Tomorrow’s quarterly MoF capex survey will give us interesting insights into how the corporate sector is being impacted by the pandemic and the collapse in global demand for Japanese autos and machinery.

The risk on tone continued last week as credit spreads tightened across products. Equities outperformed credit, with the S&P 500 and MSCI World Index both recording new highs. Cash credit outperformed CDS, especially in high yield. While inflows remained healthy, supply in Europe finally picked up with five hybrid debt deals from Vodafone, Solvay, OMV AG, Total and Finnair. We think corporate hybrids from strong companies are beneficial for yield hungry investors as well as for issuers as it enhances creditworthiness, but name selection is crucial for hybrid bondholders. Finnair was the first European airline to access debt markets after the impact of COVID-19 hit credit markets in March. Supply in September is eagerly awaited by yield hungry investors and is expected to pick up in Europe, although in the US it remains to be seen whether the record strong August has seen issuers bring September supply forward due to rising government bond yields. While supply could drive secondary spreads wider, it is likely to lead to a buy on dip mentality in the current search for yield environment.