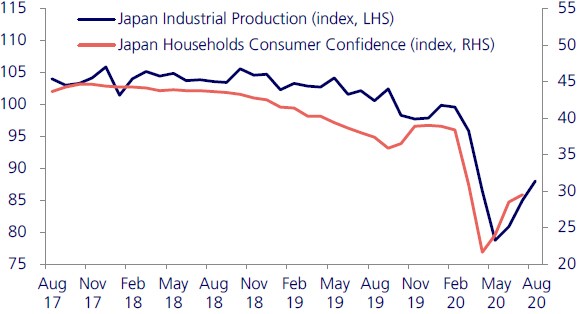 Though Japan’s economy is far from pre-crisis levels and lagging China, the US and Europe in Q2, the latest data for June show a V-shaped recovery. Both private consumption and industrial activity are finally recovering. Retail sales spiked higher in June and were stronger than consensus had expected, even though the latest Eco Watchers Survey had already indicated a steep recovery, as we had anticipated. Pent-up demand and JPY 100,000 in cash handouts for households were the main reasons. However, we do not believe that this trend will continue at the same speed, as headwinds are looming. COVID-19 infections in metropolitan areas have been rising again above levels seen during the first wave, with Tokyo’s governor warning that the red-level state of emergency may need to be re-imposed, even though we do not expect full lockdown measures. While infections and fatalities remain low on a per capita basis compared to many other major countries, public awareness is high and will likely impact spending, while bad weather conditions and flooding in July have probably hit consumption. The recovery in industrial activity is driven by the auto sector, which has been a drag in the manufacturing industry so far this year. We are encouraged by optimistic production plans for this summer. Meanwhile, Japanese equities have taken a beating following a stronger yen, with the Topix falling nearly five percent last week before today’s recovery.

US: US corporate earnings blow away consensus expectations

Not quite breaking through the recent high, the S&P 500 nevertheless ended a decent week, rising 1.7%. Friday’s spurt was helped by better than expected results from Alphabet, Amazon, Apple and Facebook. By now, 63% of the S&P 500 companies have reported their Q2 numbers. 84% of the firms have reported EPS above estimates, well above the historical average. In aggregate, companies are reporting earnings that are 21.8% above the estimates. This still leaves Q2 earnings roughly 36% lower than in Q2 2019, but thanks to the positive surprises, earnings estimates for the full year have started to rise again recently. The first estimate for Q2 GDP was also published last week, showing a decline of 32.9% (annualised), slightly better than consensus expectations. No relevant news came out of last week’s Fed meeting while initial jobless claims ticked up again, indicating that the recovery remains fragile given the recent surge in new infections. This is also reflected in the Conference Board’s consumer expectations falling back quite markedly in July.

Eurozone: Historic decline in Q2 GDP, but bounce back in H2 likely

As expected, the Eurozone saw a record decline in Q2 GDP, with a 12.1% QoQ fall (-15.0% YoY). By country, amongst the big four, Spain saw the largest quarterly decline  (-18.5%), compared to -10.1%, -13.8% and -12.4% in Germany, France and Italy respectively. Broadly speaking the declines reflected the extent and duration of the lockdowns in the different countries. However, one recent worrying trend is a spike in new infections in Spain where some regional lockdowns have now been re-imposed. It seems as if the authorities are acting quickly enough to prevent a severe second wave that spreads more widely in Spain and to the rest of Europe, but the situation will need careful monitoring. On a more positive note, business surveys continue to indicate a sharp rebound in the economy in Q3. The latest was the German ifo business climate indicator, which rose for a third consecutive month to 90.5 in July from 86.3 in June, driven by an improvement in the expectations component in particular, which tends to be a good leading indicator of actual activity.

The July Manufacturing PMIs pointed to a further rebound in activity in most countries with China, Australia and Taiwan leading the pack. Notably, China’s Caixin Manufacturing PMI reached a nine-year high, rising from 51.2 to 52.8, driven by a robust improvement in the output and new orders components. Meanwhile, Taiwan’s Manufacturing PMI crossed into expansionary territory for the first time since March. Taiwan now stands out as one of the most resilient economies in Asia throughout the crisis. Elsewhere, readings for Japan, Korea and Indonesia remained upbeat while still hovering below the 50 boom-bust line. Yet, signs of fatigue were revealed in India, Vietnam and Malaysia with the Manufacturing PMIs deteriorating after a strong ride in June. Markedly, India’s reading dived deeper from 47.2 to 46, implying a sharper contraction in activity. Given that India has the world’s third highest number of confirmed COVID-19 cases, with more than 50k new cases reported daily, activity is struggling to normalise.

According to a preliminary estimate, Mexico’s real GDP fell 18.9% YoY in Q2, the most significant contraction since INEGI began keeping records in 1990. The fall in industrial production (-26% YoY) and the service sector (-15.6% YoY) contributed to the decline in growth. In Chile, data for June continue to reflect sharp drops in activity, but showed some improvement compared to the previous month. Industrial production fell 2.6% YoY, mainly explained by a contraction of 8.3% YoY in manufacturing production, which was partially compensated for by an increase of 2.9% YoY in mining production. Commercial activity contracted 15.9% YoY, highlighting a decline in retail sales of 24% YoY. Unemployment in June reached 12.2%. The workforce decreased by 15% YoY, and the number of employed people has fallen by 1.94mn since the start of the year. Finally, the withdrawal of 10% of the pension funds began last Friday. More than 5 million affiliates (~50% of the total) have already requested the withdrawal. The Central Bank announced two new measures to mitigate volatility in the fixed income market.

Credit: Slowing down into the summer lull

Activity slowed in the credit markets as the summer lull was in full swing, especially in Europe. Primary markets remained quiet in both US and Europe last week, despite a jumbo USD 11bn deal from AT&T in the US, which has been a high-profile issuer in the US this year, along with Boeing. While spreads softened at the margin in thin liquidity, it seems that the earning season brought much less angst to credit markets than some investors had feared. While Q2 GDP data and corporate earnings growth were deeply negative, earnings handsomely exceeded the low expectations of equity analysts. Inflows continue into credit given a search for yield environment driven by dovish central banks. The Fed extended the deadline for most of its credit programs, and we think a further extension is likely, although it slowed down its purchases with the powder seemingly left dry to deal with more volatility, when it occurs. Credit spreads are not cheap anymore though, making credit a carry play among dismally low government bond yields.