New COVID-19 cases surge in the US 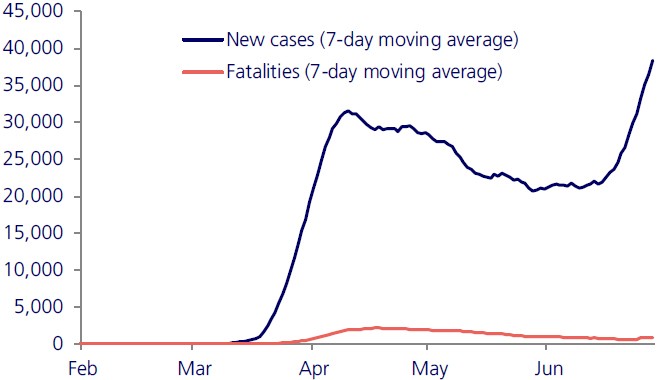 The S&P 500 Index fell by 2.9% last week as investors started to worry about the reaccelerationin new COVID-19 cases in the US over the past two weeks. Not surprisingly,companies in the travel and leisure sector were particularly hard hit. Daily new cases nowsurpass the peak reached in April and the 7-day moving average shows a steep rise. On a morepositive note, the number of fatalities has not risen in proportion to the surge in new cases.This could simply reflect a time lag, but it could also be because people in risk groups were lessaffected by the recent surge in COVID-19 cases and that, generally, the treatment of cases hasimproved since the first spike in April. In any case, if the acceleration in new infections cannotbe brought under control there could be major headwinds for the economic recovery that isunderway caused either by new regional lockdowns or by the fact that people choose torestrict themselves by reducing social activities. In a reaction to the rise in new cases, a numberof states have slowed down plans to reopen their economies. Meanwhile, the economycontinues to heal with Markit’s Composite PMI climbing back to 46.8 in June from 37 in May.Initial jobless claims continue to drift lower though at a slower pace than before. Continuingclaims fell back below 20 million for the first time since mid-April, indicating that rehiring keepssupporting the labour market.

In the Eurozone, various business confidencesurveys showed a further bounce back insentiment in June, after May had already seena substantial improvement from the all-timelows recorded in April. For example, theEurozone Flash Composite PMI increased to47.5 in June, from 31.9 in May and 13.6 inApril. The French Manufacturing PMI andServices PMI both rose back above the 50mark that is deemed to separate expansionfrom contraction. The German ifo businessclimate indicator also picked up in June,driven by the expectations component inparticular. France’s national businessconfidence indicator, released by INSEE, alsosaw its largest monthly increase ever.However, it will likely take many quartersbefore economic activity levels in theEurozone return to pre COVID-19 levels.Meanwhile, the ECB minutes included asection designed to reassure the GermanConstitutional Court (GCC) with respect tothe ECB’s QE asset purchases by explaininghow it was a proportional policy response,suggesting that enough will be done toreassure the GCC.

Japan’s June Manufacturing PMI did not bounce back as did its peers in the US and Europe. Instead, it fell slightly to 37.8. Some relief came from the fact that its ‘new orders’ component and the ‘new export orders’ index both rose for the first time in five months. Meanwhile the Services PMI spiked higher by 15.7 points to 42.3 amid the lifting of the state of emergency. We believe there is more room to the upside as the warning to avoid trips to other prefectures was lifted last week. Department store sales were down 71.6% YoY in May, while overall retail sales recoveredslightly, but were still down 12.3% YoY. Tokyo’s core inflation remained at 0.2% in June. Significant price rises were seen for ‘stay-at-home’ items like printers, desktop PCs and rice cookers. Meanwhile, South Korea’s exports for the first 20 days of June, a leading indicator for Asian export activity, were down 16.2% YoY on a working day adjusted basis, less than the -23.6% in May. China’s, PBoC kept the loan prime rate (LPR) unchanged and refrained from cutting the reserve requirement ratio (RRR) while the Philippine’s central bank cut its policy rate by 50bps.

Australia’s CBA Flash PMIs experienced a robust rebound in June, with the Services PMI rising sharply from 26.9 to 53.9, crossing the boom-bust line of 50 into expansionary territory. Preliminary trade data show a smaller contraction in exports by 4% MoM, compared to a decline by 12% in April, supported by buoyant demand for coal and iron ore from China. Preliminary retail sales also picked up by 16.6% MoM after having fallen by around 18% in April. The May unemployment rate increased from 6.2% to 7.1%. However, without a historical drop inthe participation rate, the unemployment rate would have climbed to double digits. On a brighter note, the weekly ABS job survey suggested that payroll jobs and total wages paid edged a touch higher on a weekly basis between 25 and 30 May. Meanwhile, Victoria has seen a moderate rise in infections with around 33 new cases reported, leading to a ramp-up in testing and renewed containment measures. For now, the situation seems under control

Risk assets had a rough week as increased angst around rising coronavirus cases in some US states and emerging markets weighed on sentiment. Global equities dropped by around 2% and credit spreads widened by around 5bps to 7bps in investment grade credit. The muted and orderly price action in credit was driven by improving supply/demand technicals. Supply decreased to the lowest volume since the pandemic began, with the US investment grade market recording just under USD 24bn in issuance, a far cry from the USD 100bn plus pace during March andApril. While higher volatility weighed on supply, we expect supply to slow down anyway. The Fed announced the results of stress tests on the US banking sector that showed banks should remain well capitalised under the adverse scenarios of a “V”, “U” or “W” shaped economic recovery, although several banks would approach minimum capital levels. The Fed also asked banks to reduce shareholder payouts at least in the short term. While this is a credit positive, it weighed on US bank stocks, causing bank stock indices to decline by 8% on the week.

While covered bond spreads peaked later than corporate credit spreads, they have retraced most of the widening and are now close to January levels. Covered bonds remained stable last week, slightly outperforming corporate credit. Looking ahead, covered bonds are likely to remain supported, as the ECB remains a strong buyer and supply is dwindling. Given the current pace of net purchases and reinvestment of redemptions, the ECB could end up owning half of the Eurozone covered bond market by year end. Covered bonds are also likely to beboosted by a dearth of supply, given cheaper funding alternatives available to banks, evident in the high TLTRO III take-up and easing of repo collateral rules. Indeed, activity remains so muted in the primary market that cumulative supply is down 30% YoY, in stark contrast to corporate credit issuance. All in all, the European covered bond sector is likely to remain resilient.

To hear directly from our Fund Manager partners on their views, click the links below: