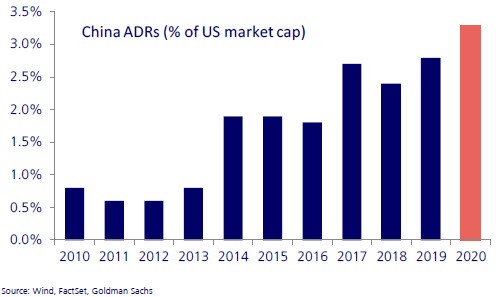 An improvement in business conditions from rock bottom levels in Europe, the US and Japan, as evident in their respective PMI readings for May, helped to stabilise investor sentiment last week. However, a further deterioration in the Sino-US relationship is looming as a dark cloud on the horizon. US complaints about China not meeting the conditions of the ‘Phase One’ trade deal were followed by President Trump’s warning that new tariffs and a restriction on public pension fund investment in Chinese equities would be imposed in response to China’s perceived mishandling of the corona crisis. On Wednesday, the US Senate passed a bill to suspend or delist Chinese US-listed ADRs. Finally, on Friday the US Commerce Department added a total of 33 additional Chinese entities to the so-called ‘Entity List’, blocking their access to US exports, following perceived human rights abuses and military activity. The US ban on Huawei is likely to slow down 5G progress in China once chip inventory runs out next year, while also negatively impacting Asian semiconductor and memory chip exports. Finally, as China is considering a new national security law applicable to Hong Kong, spurring fears among Hong Kong citizens and investors, US senators announced they may sanction Chinese officials violating Hong Kong’s autonomy and revoke special trading privileges. Unfortunately, the increase in tensions comes at a time when overall investor confidence is strengthening.

China: NPC stimulus measures roughly in line with our expectations

Premier Li Keqiang reported the government's  2020 work plan at the National People's Congress (NPC) last week. Most economic measures were roughly in line with our expectations, outlined in our Topical Thoughts paper China’s path out of the corona crisis. The government refrained from setting a growth target for this year but set a budget deficit target of at least 3.6% of GDP while the quota for the issuance of ‘special’ government bonds exceeded the targets set in prior years. Monetary policy targets were in line with the PBoC’s latest monetary policy report. We expect more RRR and rate cuts and an acceleration in aggregate financing growth. Although the government is aiming to create fewer new urban jobs than in the prior three years, it will try to keep the ‘surveyed’ urban unemployment rate at around 6%. No cash handouts to consumers have been planned. We applaud the fact that a more measured and targeted approach has been formulated. Instead of propping up the real estate market, the focus is more on both traditional and ‘new’ infrastructure spending (5G, AI, electric car charging stations).

In an unscheduled joint statement and press  conference last Monday, French President Emmanuel Macron and German Chancellor Angela Merkel backed a EUR 500 bn Recovery Fund as part of the EU’s seven-year budget cycle, the so called Multi-Annual Financial Framework (MFF). The spending will be front loaded in the early years of the MFF, with grants rather than loans and financed through issuance of debt by the European Commission on behalf of the EU, so effectively issuance of jointly guaranteed debt. Despite this being a temporary measure for just the next few years, this is an important development, as Germany has effectively recognised the need for some form of debt mutualisation and fiscal transfers. We have long argued that this was necessary to make the EU and especially the single currency area more resilient and expected that it would eventually happen. There are likely to be many twists and turns before a final proposal for the recovery fund is agreed, but developments last week were encouraging.

With the UK relatively late in imposing a lockdown, the economic damage is now more and more visible in the economic data. Retail sales plunged by 15.2% MoM in April. A less pronounced decline in food stores and a surge in online spending limited the overall drop. Household spending is likely to remain weak in the near term as lockdown measures are eased only slowly and consumer sentiment is at its lowest level since the financial crisis. Not surprisingly, the budget deficit has soared as the government provides much needed support to businesses and households. The latest data show that tax payments received in April were down 42% compared to the same month last year. At the same time central government spending jumped 52%. This resulted in net debt rising by 17.4% of GDP on a year earlier to 97.7%. The economy shows signs of stabilising, but more fiscal support will be needed. The Flash PMIs show that the decline in business activity slowed in May, but the economy remains on a steep downward trajectory.

Japan: Recession intensifies, but the worst should soon be over

Japan’s economy contracted another 3.4% on  an annualised sequential basis in Q1 following a 7.3% drop in Q4 last year after the consumption tax hike. The second quarterly contraction in a row meets the definition of a recession, which will intensify this quarter following the guided COVID-19 lockdown. The drop in private demand is the major contributor, followed by negative net exports, while public demand remains stable. Tokyo department store sales tumbled 76% YoY in April, as only food sales were permitted. Exports were down 22% YoY, badly hit by weak demand from the US and Europe, while exports to China climbed back to pre-virus levels. Japan’s trade deficit widened, as imports were firm. The Composite PMI inched up a bit to 27.4 in May but remains close to its record low. Core inflation, ex fresh food, at -0.2% YoY, fell back to deflationary territory in April. We believe Japan’s economy has now troughed, as the state-of-emergency has been lifted in most prefectures. Meanwhile, the Bank of Japan launched a new lending facility to support small businesses, which should help to avoid a spike in bankruptcies.

Credit spreads rallied sharply after a hiatus of  a few weeks as heavy supply showed signs of stabilising and new issue premiums compressed further. Notably, spreads rallied even on days when equities were weak due to US-China tensions and poor data.  Investment grade corporates have raised a significant amount of debt so far this year, causing liquidity risks to diminish significantly, with the Fed’s primary market program likely to help further. We believe debt supply is likely to normalise going forward, which together with central bank purchases in secondary markets would potentially create positive supply/demand dynamics in credit market. Indeed, the Fed stepped up its ETF purchases last week to a total of USD 1.8bn and is expected to buy around USD 50bn a month, including corporate bonds as well, until September to meet its target. Credit conditions are also normalising, as fund inflows continue, while LIBOR-OIS and commercial paper spreads have nearly recovered to pre-COVID levels. Fundamentals, however, keep deteriorating as default rates climb further and bankruptcies continue.