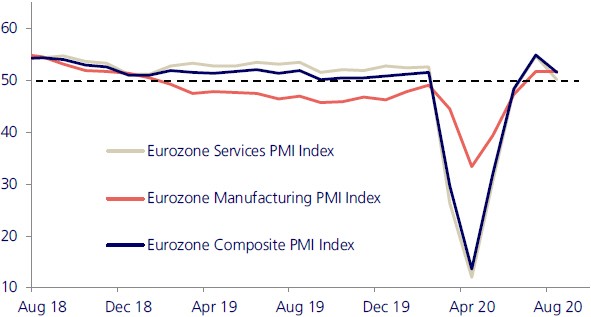 The most widely watched Eurozone business sentiment survey, the Flash Composite PMI, disappointed last week, falling to 51.6 in August from 54.9 in July, well below expectations of an increase to 55. This has heightened concerns that the V-shaped recovery in the Eurozone is stalling, and in particular that additional lockdowns measures introduced recently because of a resurgence in virus cases may be pushing the region back into recession. We think it is wrong to draw such a negative conclusion from this data, however. The 3.3 point fall in the composite PMI in August needs to be seen within the context of substantial gains in recent months. After hitting an all-time low of 13.6 in April, the index has still rebounded 38 points in four months. The strong snap back in the recovery as businesses re-opened and pent-up demand boosted consumer spending was always likely to come to an end at some point. However, we still expect the Eurozone to expand over the next few months and quarters, albeit at a more subdued pace, supported in particular by large amounts of government and central bank stimulus. Assuming that new virus cases stay manageable and do not develop into a large second wave and that lockdown measures are targeted, we expect the recovery to continue in H2. However, it could take some time (i.e. at least a few quarters) until pre COVID levels of economic activity are reached again for the economy as a whole.

Business activity improved further in August  as the economy continued to reopen with the Composite PMI rising to 60.3 from 57.0 in July, that is the highest level since 2013. The recovery was broad based across sectors but particularly strong in the services industry, which also suffered more during the lockdown. Government measures helped to support the recovery as hotels and restaurants reported a notable boost from the “Eat Out to Help Out” scheme. Despite the solid rebound in activity the employment situation has deteriorated slightly as firms remain concerned regarding the longer-term outlook. Thanks to the government’s job protection program this has not resulted in weaker household spending. Retail sales have grown by 3.1% YoY, the fastest rate since July 2019. Nevertheless, the uncertain outlook and the expected phasing out of government support are likely to provide some headwind to the labour market and household spending. Accordingly, consumer confidence has not improved further in August and remains at relatively modest levels.

Japan’s economy plunged in Q2 despite a ‘V’- shaped consumption recovery in June. So what do recent, more forward-looking indicators tell us about the latest trend? With the Composite PMI for August unchanged at 44.9 and still below the boom/bust level of 50 it seems Japan’s recovery has come to a standstill. While the Manufacturing PMI improved to a six-month high, and major sub-indices like output, new orders and new-export orders recovered, the Services PMI fell again, reflecting restrictions in transport, dining and entertainment following a second wave of COVID. A similar picture is revealed by the Reuters Tankan for August. The Non-Manufacturing index improved only slightly, still dragged down by wholesale, lodging and entertainment, while the outlook deteriorated. On the positive side we note an improvement in the Manufacturing Index from -44 to -33, with the outlook improving to -22. However, sectors like steel and transport equipment remain at very low levels, despite a recovery. Meanwhile core machinery orders fell to a seven-year low in June, urging a cautious outlook on business investments.

Korean export statistics are timely and provide  early insights into Asian export performance overall. By mid-August, exports had picked up steam from July, even though they were still down 3.7% YoY in working-day adjusted terms. Computer peripherals were the driving force in terms of goods categories, while semiconductor exports continue to do well, and even auto exports recovered following a steep drop. Taiwan’s export orders surged 12.4% YoY in July, the steepest rise in two and a half years, driven by strong tech exports. In regional terms there was strong demand from China, the US and Europe. Even though Japan’s July exports picked up from June, they are still down 19.2% YoY. While electric machinery and semiconductor exports are picking up, auto exports are still down 30% YoY. Singapore’s non-oil exports were down in YoY terms, if strong gold exports are excluded, with tech and pharma-related export growth slowing, and petrochemical exports weak. Indonesian exports in July were similarly driven by precious metals. While recovering, exports are still down nearly 10% YoY.

The resignations of some economic team members as well as the pressure to increase fiscal spending generated the rumour that the Minister of the Economy, Paulo Guedes, would also step down. The rumour was denied by Minister Guedes and by President Bolsonaro. Uncertainty regarding the government's ability to comply with fiscal rules and the spending ceiling has increased, affecting the financial markets. These concerns grew when the Senate overturned the presidential veto that froze public sector salaries until 2021. However, the lower house reversed that decision, which contained an increase in public spending of about ~BRL130bn. The exchange rate continued to depreciate and closed the week at USD/BRL 5.62, forcing the Central Bank to carry out interventions in the spot market. The Brazilian real remains one of the world's most depreciated currencies this year. The conflict between the government and the Senate could complicate the approval of fiscal reforms. Finally, the latest polls show an improvement in Bolsonaro's approval rating.

Credit markets were resilient last week despite  heavy supply in the US. Cash credit softened under the weight of supply, while CDS indices were unchanged to slightly better on the week. US equities outperformed credit, led by a rally in technology shares that more than offset the weakness in bank stocks, which were weighed down by a decline in bond yields. Resilience of credit remains warranted in our view due to a number of reasons. With government bond yields as low as they are, the allure of credit is attracting flows into the asset class and last week confirmed the picture. At the same time, while supply has picked up in the US, European primary supply seems non-existent and we expect US supply will slow down after September. While there are some signs of acquisition and share buyback financing, most importantly, the updated leverage metrics in Q2 2020 are better than expected, or rather feared. Although leverage has increased to new records, better than expected cash flows and conservative balance sheet management has helped contain the rise.