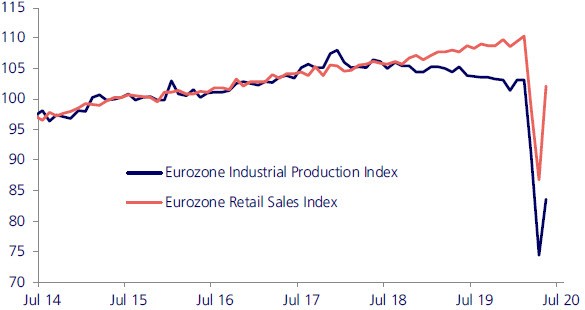 As of the time of writing, EU leaders are still struggling to reach agreement on the EU recovery fund after three days of tense negotiations. The main sticking points are the split between grants and loans and the conditionality attached to disbursements. The latest initiative is to reduce the total amount of grants from the original Franco-German proposal of EUR 500bn to around EUR 350bn and match this with an equal-sized loan element. A deal could still come in the next few hours, but if not, it is likely that another summit will be called in a few weeks’ time. Ultimately, we still expect there to be a deal. It is also important to recognise the progress that has been made in recent weeks. There is already broad agreement that the grants and loans spent over the next four years with the aim of boosting the European economy will also be used to transform the economy to make it more environmentally sustainable. Crucially, the EU will be allowed to borrow substantial amounts, effectively meaning that the region is mutualising some of its debt. Elsewhere, the ECB did not make any monetary policy changes last week, but President Christine Lagarde stated that the intention was to use the full amount of the EUR 1.35tn PEPP and show flexibility with respect to government bond purchases, which is supportive for periphery bond markets. May Eurozone industrial production confirmed the bounce back seen in national data, but with overall output still well below pre COVID-19 levels.

US: Consumer sentiment ticks down in July

The S&P 500 ended its third week in a row with a positive performance, gaining 1.3%. Investors continue to look through rising infection rates with a new daily record set at more than 78’000 new cases. Focus shifted to the Q2 earnings season with a number of banks reporting mixed results. Trading income supported the profits of Goldman Sachs, Citigroup and JP Morgan while Wells Fargo posted its first quarterly loss since 2008, causing it to lower its dividend. Economic data were mostly on the positive side. Small business optimism and industrial production recovered further in June. Retail sales rose another 7.5% MoM, following May’s 18.2% surge, lifting sales back above the level of a year ago. Meanwhile, the University of Michigan’s Consumer Sentiment Index ticked back down as both current conditions and expectations deteriorated in July. Initial jobless claims fell further, but at a slower pace while remaining at very high levels. New local lockdown measures as well as self-imposed restrictions due to rising infection rates are likely to provide some headwinds for the economy.

China: GDP is back above its pre-crisis level

China’s economy grew faster in Q2 than consensus had expected, with GDP up 11.5% QoQ, recovering from a 10% drop in Q1. In YoY terms, real GDP was up 3.2%. This brings economic activity to a record high. June data confirm solid growth in infrastructure and property investment amid ample funding, as manufacturing investment lags. Industrial and export activities remain solid, while the service sector has room to catch up. Retail sales continue to struggle, impacted by weakness in catering, travel and entertainment, but online sales continue to surge. Auto and communication appliance sales were strong if adjusted for negative base effects. We stick to our growth forecast of 2½% this year, incorporating a brisk, but slower growth path in the second half of the year compared to Q2. Risks include the intensifying trade conflict with the US and a major second infection wave later this year, even though China has proven that it can quickly contain infections at new hotspots. Industrial and consumer activity in the flood stricken Southern and Central provinces will slow, before reconstruction activity boosts growth.

Australia: At a fragile stage

July consumer confidence indices deteriorated  again following a robust improvement in June. A resurgence of COVID-19 infections in Victoria with a renewed lockdown in Melbourne dampened consumer sentiment, posing risks to the economic recovery. It should be noted that Victoria currently accounts for more than 20% of national output. On a positive note, business confidence indices rebounded sharply in June, but it is still too early to confirm a sustainable uptrend. Meanwhile, June employment growth was buoyant with around 210k new jobs created. Hours worked also rose by 4% MoM. Despite robust job growth, the unemployment rate edged higher from 7.1% to 7.4%, mainly due to a revival in employment participation. The JobKeeper program, which will expire in September, has played a key role in preventing a double-digit unemployment rate. Should the program not be extended beyond the scheduled timeline, the labour market will face a great challenge, especially in the context of the infection resurgence.

Despite government opposition, the Deputies in the lower house passed a bill to modify the pension system. Specifically, a one-time withdrawal of up to 10% of private pensions was approved. Withdrawals cannot surpass ~USD 5’440, with a minimum amount of either ~USD1’270 or the total savings if the total is lower than the minimum. The article for creating a state-owned pension fund to compensate for the withdrawals was not accepted. The government announced a new fiscal stimulus package focused on the middle class to convince Chile Vamos Deputies to reject the bill, but it was not enough. The new fiscal package includes, among others, direct transfer, subsidized loans, rental subsidy, and delayed mortgage payments through a government guarantee. Now government efforts are focused on the Senate, where the bill will be voted on in the coming days. To be approved it requires a special quorum of three fifths of the Senators. The pension system currently manages assets up to ~USD 200bn, and it is estimated that if the bill is approved, up to USD19 bn could be withdrawn.

Credit: The rally continues despite heavy US bank provisions

Credit markets continued to rally last week, as  supply slowed significantly across Europe and the US. Major US banks reported a combined provision of around USD 30bn, although earnings of different banks had significant dispersion. Trading revenues rose markedly, especially in the fixed income business, causing banks such as Morgan Stanley to report a record quarter. On the other hand, banks with a lower share of trading or investment banking activities, such as Wells Fargo, reported a loss due to provisions on consumer credit. While the results confirm our view that the US banking sector remains creditworthy, the read-across to European banks also confirms our caution. The ECB’s lending standard report highlighted that while lending standards improved modestly for corporate loans, they are expected to rise significantly when government guarantees lapse. Moreover, demand for corporate loans was driven by working capital needs while fixed investment has likely plummeted. Notably, lending standards have tightened for mortgages and consumer loans, which don’t benefit from government guarantees.