Small businesses’ hiring intentions are on the rise 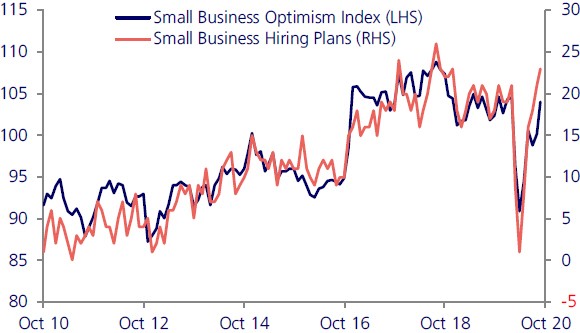 The S&P 500 ended the week marginally positive, hiding a couple of more volatile trading days and significant sector divergences underneath the surface. The banking sector was amongst the laggards as a number of major banks reported their Q3 results. Although they beat analysts’ expectations on average, a cautious outlook weighed on the stocks. Economic data show a more benign picture, however. Small business optimism ticked up to the highest since February, with hiring plans rising to the highest in almost two years. More hiring by small businesses will be crucial for a continued recovery. Although the employment situation has significantly improved since the peak of the crisis, initial jobless claims remain at more than 800’000 a week and the recent drop in continuing claims is mainly driven by a large number of people rolling off regular state programs. Nevertheless, the mood of households appears to have lightened, with the University of Michigan’s Sentiment Index ticking up to 81.2 in October from 80.4 in September. The pickup was exclusively driven by expectations, however, as the perception of current conditions has deteriorated over the past month. Overall, sentiment remains far below pre-crisis levels. Despite the modest sentiment, households keep spending with retail sales growing 1.9% MoM, more than expected, lifting the annual rate to 5.4%.

Credit: US banks kick off the earnings season

Despite rising Coronavirus cases in Europe and a lack of progress on the US fiscal stimulus, credit markets were stable last week as flows continued to pour in, especially into US investment grade credit. US bank earnings were strong but failed to lift bank stocks. Trading revenues were robust, while provisions declined due to an improving economy. However, investor angst seemed to focus on the outlook for 2021 and the consequent reserve builds, as trading gains were perceived as being non-repeatable. Most banks adjusted their expectations for peak loan losses to late 2021 citing concerns about forbearance periods ending and fiscal stimulus running out. We think banks’ concerns were reflected in the lending standards survey of both the US and Europe. However, US banks remain strong from a credit perspective, as was evident in secondary market spreads of US financials, as well as strong demand for Bank of America’s new bonds. That said, the read across to European banks is more concerning and indeed, European bank stocks declined significantly last week.

Further lockdown measures have been announced as the number of new virus cases continues to rise, increasing downside risks for the economy. The French government declared a health emergency and introduced a month-long 9pm to 6am curfew in major cities, while lockdown measures were also ramped up in Italy, Spain and the Netherlands. These latest measures will likely impact economic activity in Q4, especially the service sector, though they are still far from the scale of restrictions imposed earlier this year. Last week’s data point to a moderation in the pace of economic growth. The German ZEW expectations index, a useful leading indicator for the economy, fell by more than 20 points to 56.1 in October, albeit from a 20-year high in September. Industrial production growth in the Eurozone also slowed to 0.7% MoM in August from 5.0% MoM in July. Finally, the EU summit saw limited progress on the EUR 750bn Next Gen EU initiative, with discussions preoccupied by Brexit negotiations. Given the current situation, parliamentary ratification of the initiative is urgently needed to get the ball rolling on a disbursement of funds next year.

Japan: A slow but steady recovery

Following volatile readings over the last few months, core machine orders rose marginally in August, while machine tool orders recovered more than expected in September. As leading indicators for capital expenditure, both data points seem to suggest that a pickup in lacklustre business fixed asset investment is finally on its way. Other data, including today’s released September export data, the Reuters Tankan for September, August industrial production and manufacturing capacity utilisation also point to a gradual improvement, led by the technology sector. Meanwhile, mobility data show that activity continues to normalise. While this is encouraging, the recovery remains fragile, with the rebound less dynamic compared to neighbouring economies like Korea, Taiwan or China. Looking forward, we expect the recovery to continue, as long as Japan’s ability to contain the virus remains intact.

China’s September activity data confirm that  the economic recovery remains solid. Industrial production and retail sales data came in stronger than expected. While infrastructure and manufacturing fixed asset investment growth slowed, it was compensated for by strong growth in services and property investment. September exports remained solid with an increase of nearly 10% YoY, as the pickup is broadening out to other sectors rather than just technology and medical equipment. Imports surged by 13.2% YoY, much stronger than consensus had expected, supported by robust growth in materials and electronic parts imports. This confirms the underlying strength of domestic demand. Growth in aggregate financing reached a 33-month high of 13.5% YoY in September, supported by strong equity financing and local government bond issuance. Headline CPI fell from 2.4% to 1.7% YoY, pushed down by falling pork prices as the Swine Flu impact wanes while producer prices remained negative at -2.1% YoY. Real GDP was up 4.9% YoY in Q3 vs. 3.2% in Q2, slightly missing consensus expectations.

Chile: Fitch cuts the sovereign rating to A-

Fitch cut Chile’s long-term foreign currency sovereign rating from A to A- and revised their outlook to stable from negative. They also cut the long-term local currency rating by two notches, from A + to A-. However, Chile's sovereign rating remains the highest in Latam, and its reduction did not surprise the market. The decision was based on the deterioration of public finances, initially the result of increased social spending driven by social unrest in October and November of 2019 and amplified by the fiscal containment measures implemented during the recession caused by COVID-19. The rating agency estimates that the government debt burden would continue to grow in the medium term, given Chile's lower trend growth prospects and difficulties consolidating its fiscal accounts due to the heavy political calendar and social pressures. Government debt to GDP should increase from 27.9% to 33.7% in 2020. We estimate Moody’s (A1 and negative Outlook) and S&P (A+ and negative Outlook) will also cut the sovereign rating by one notch in the short term.