China’s recovery is on track, but watch out for stumbling blocks 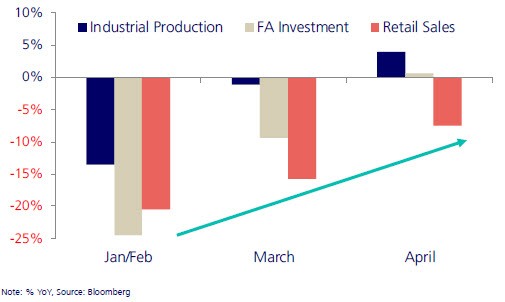 China’s recovery from the corona shock continues, with the pace on the supply-side stronger than the demand-side. Industrial production was up 3.9% YoY in April, as 28 out of 41 sub-sectors increased production on a year-on-year basis, particularly in the high tech and equipment segments. We note strong production growth of nearly 30% in semiconductor integrated circuits as well as micro-computers. Though confirmed by stronger export activity in these segments, we believe that this trend is unlikely to continue, as exports will probably suffer from delays due to lockdowns in North America and Europe as well as signs of renewed trade tensions with the US. Fixed asset investment managed to crawl back into growth territory, driven by real estate investment (+7%), mainly in existing projects, and infrastructure growth (+4.8%), while manufacturing investment has lagged. Retail sales were still down 7.5%, but are recovering further, as sales during the Labour Day holidays in early May inched higher and as service sector activity is picking up steam due to re-opening activities. Any further improvement will hinge on how the labour market as well as SME and family business activity progresses, as outlined in our latest Topical Thoughts paper, China’s path out of the corona crisis. Meanwhile, stronger monetary policy stimulus is already becoming visible. All eyes will now be on the National People’s Congress that will start on Friday.

US: Retail sales plunge as the economy comes to a full stop

Despite a partial recovery in the second half of the week the S&P 500 lost 2.3% over the past five trading days, the worst week since the depth of the stock market plunge in March. Rising US-China tensions and a cautious outlook by Fed Chair Powell seem to have weighed on investors’ sentiment. Not surprisingly, economic data continue to be weak but there are some rays of hope. Small business optimism fell in April, though less than expected, remaining well above levels seen during the financial crisis. Retail sales tumbled by 16.4% MoM in April, reflecting the full extent of the lockdown and households’ reluctance to spend during the crisis. On a more positive note, the University of Michigan’s Consumer Sentiment Index shows a small uptick in May from its recent multi-year low. Initial jobless claims continue to trend lower (despite a data entry error overreporting actual numbers), while continuing claims rose only a little, indicating that the employment situation is beginning to stabilise though still at depression-like levels.

Data released last week confirmed the severe hit to the Eurozone economy that took place towards the end of Q1, with even worse data likely to come for Q2. Eurozone industrial production fell in March by the most on record, -11.3% MoM (-12.9% YoY), with the decline broad-based across sectors. The second estimate of Eurozone Q1 GDP was also confirmed at a record -3.8% QoQ. The German economy contracted by-2.2% QoQ, less than the Eurozone average, as lockdown restrictions were less severe than in many other countries. In our view, based on the recent easing of lockdown restrictions and substantial monetary and fiscal stimulus, we should see a sharp bounce back in Eurozone activity in the second half of the year. Meanwhile, the implications of the German Constitutional Court (GCC) ruling of May 5, that the ECB has three months to justify QE or the Bundesbank would no longer be able to participate, continue to reverberate. German Chancellor Angela Merkel indicated in parliament last week that she wanted to make sure the Bundesbank continued to participate in QE.

GDP contracted by 2% QoQ in Q1, the biggest drop since the financial crisis. This is remarkable as the UK was relatively late in imposing a lockdown, meaning that Q1 was hardly affected by social distancing measures. This does not bode well for expected growth in the second quarter. Monthly data reveal that GDP fell by 5.8% MoM in March alone, meaning that the economy will likely suffer a double-digit contraction in Q2, and see the worst quarter since World War II. The biggest hit is expected in April, before the situation begins to stabilise in May as lockdown measures are slowly eased. Sterling lost 2.4% against the US dollar last week as the latest round of trade talks with the EU failed to deliver any notable progress. Some of the key obstacles are the EU’s demand for a level playing field, access to the UK’s fishing waters and the UK financial services firms’ access to the EU. There is one more scheduled round of talks, though an agreement seems unlikely before the end of June by when the UK would have to apply for an extension of the transition period, a step that PM Johnson has repeatedly excluded.

I ndia’s industrial production plunged by 16.7% YoY in March even though the country only went into a complete lockdown on March 25. Last week, the government unveiled a second stimulus package of 10% of GDP, including both fiscal and monetary support. The package focuses on vulnerable areas of the economy, such as low-income households, SMEs and Non-Bank Financial Companies (NBFCs). However, stimulus measures mainly centre around credit guarantees, loans, and reductions of social security contributions for employees. That means immediate spending, which has the most direct stimulus effect, is limited. Meanwhile, Indonesia and Malaysia have released their GDP prints for Q1. Both show resilience, registering growth of 3% and 0.7% YoY respectively. Malaysia declared the Movement of Control Oder on March 18 while Indonesia imposed restrictions only until mid-April. That means most of the lockdown time lies in Q2. Therefore, we expect that the full-blown economic damage will only show up once Q2 data are released.

Credit markets traded with a mixed tone last week amid weak equities, poor economic data out of major western economies and rising US-China trade tensions. On Friday, however, US corporate bonds outperformed as the pace of supply slowed down. The heavy debt supply in both the US and Europe since mid-March has been weighing on spreads and a slowdown in issuance seems essential for spreads to tighten. Fund flows continue to normalise with most segments of the market seeing a continued recovery since mid-March. Defaults continue to rise with JC Penney joining the list of companies filing for bankruptcy. The Fed started buying credit ETFs, although participation was reportedly low as many ETFs were trading at a premium to net asset value. The Fed is likely to be more active when ETFs trade at a discount. Details on the Fed’s municipal liquidity facility were disappointing, as the rates of borrowing suggest the Fed is likely to only act as a lender of very last resort as opposed to an active supporter of the market.