Stocks take a round trip as investors become unsettled 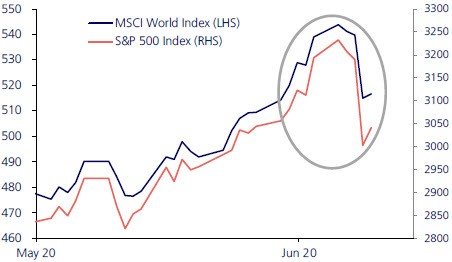 An innocuous first few trading days last week were short lived, as stocks nosedived on Thursday, giving up much of the prior week’s gains. The S&P 500 plunged close to 6% on the day, the worst decline since March, before recovering modestly on Friday. Two issues appeared to play on investors’ minds. The first was Fed Chair Powell noting that the committee was forecasting a severe contraction in GDP of 6.5% for this year, more than consensus was expecting. The second was data on COVID-19 infection rates, which showed a notable pickup in some states that were advanced in reopening their economies, including Florida, Texas and California. While this will require careful monitoring, the increase is modest and may be a function of greater testing. We had expected that there would inevitably be some increase in cases as economies started to ease lockdown restrictions, which is factored into our own projections, but how they are subsequently contained will be critical. As for the Fed, we believe that the lower growth projections will mean that there will be no let up on stimulus and are encouraged that getting inflation to target and regaining full employment will be the priority, even if this means that asset prices will be pushed higher. While equities had moved ahead of fundamentals and were due for some form of consolidation, the liquidity story remains a potent driver for stocks, provided virus infection rates are held in check.

US: The Fed signals more QE and no rate hikes till 2022

As discussed in the main section, the S&P 500  suffered its worst week since mid-March on rising fears of a second wave of COVID-19 as well as a relatively downbeat outlook by Fed Chair Powell. However, the Fed also sent a dovish message in signalling no rate hikes through 2022 and a continuation of its QE purchases of at least the current pace of around USD 80bn of Treasuries and 40bn of MBS a month. Meanwhile, economic data continue to reflect that the economy is healing from the lockdown measures. Small business optimism improved by the most since late 2017. The measure of expected economic conditions six months from now even rose to the highest since August 2018. Initial jobless claims keep falling though remain historically high at 1.5mn last week while continuing claims receded to 20.9mn from 21.3mn the week before. The University of Michigan’s consumer sentiment index climbed the most since 2016 in early June, lifted both by better current conditions as well as improving expectations.

Eurozone: Equites sell off despite continued easing of lockdown restrictions

Whilst the epidemic situation continues to get  better in the Eurozone and lockdown restrictions are being gradually eased, concerns about a second wave elsewhere in the world led to a sell-off in equity markets last week that impacted the region as well. The Euro Stoxx 50 index was down 7% on the week, though following a strong rally in the preceding weeks. Periphery bond spreads also widened a little, but the extent of widening was modest given the sell-off in equity markets and reflective of the massive bond buying planned by the ECB. On the data front, Eurozone industrial production was grim, but not unexpected. Output fell around 17% in April, after a 12% decline in March. Eurostat, the statistical agency, noted that YoY output fell 28% in April, much greater than the worst month of the Global Financial Crisis (GFC) in April 2009. However, to some extent this is backward-looking data as business surveys already point to a sharp pickup in output over the next few months, though with overall activity remaining well below pre COVID-19 levels.

Japan’s economy contracted for three quarters  in a row, even though Q1 growth was revised up to an annualised rate of -2.2% following a slower than expected slump in corporate capital investment. We do not think that capex is about to improve substantially soon. The quarterly corporate BSI survey, a predecessor for the quarterly Tankan, speaks a different language. The business conditions diffusion index tumbled from a prior -10.1 to -47.6, the lowest level since the Global Financial Crisis in 2008. The index for small companies even crashed to a record low of  -61.1. This does not bode well for capex, even if companies project a recovery in H2. Consequently, companies have cut their overall capex forecasts to -4.4% YoY this fiscal year, while smaller firms intend to cut investments even by 22.8%. Meanwhile, the Eco Watchers Survey recovered slightly in May from its record low of 7.9 to 15.5, which is still below the GFC level, while projecting a recovery to 36.5, a level that still suggests contraction, though at a smaller rate. Wages fell by nearly 2% YoY in April, driven by lower overtime compensation.

China: The economic recovery is well on track

China’s economic activity data for May released today are encouraging, as prior year levels have been exceeded in most cases, even though growth rates are still lower. Public infrastructure investment and property construction were the predominant growth drivers for fixed asset investments and industrial production, but services activity is picking up, and car and property sales have rebounded. Exports slowed in May in line with our expectation, as filling the backlog of prior orders has been running out of steam. Imports were down 16.7% YoY in May, led by industrial commodities. Meanwhile, credit growth is accelerating, hitting a two-year high of 12.5% YoY. All major components contributed positively, including corporate loans, corporate as well as government bond financing and even shadow banking. We believe the surge in local government bond financing and bank loans to SMEs will continue, in line with targets set by the National People’s Congress. Overall, we stick to our GDP growth forecast of 2.5% for this year, which should not be hampered by the latest coronavirus outbreak in Beijing.

Credit markets were volatile along with other  risk assets last week as fears of a virus resurgence hit the market, although European credit was more resilient than US credit. An increasing number of coronavirus cases in some US states and other parts of the world, including in China over the weekend, have taken some steam out of the recent rally. That said, the spread rally beforehand had started looking somewhat overheated with spreads having tightened very fast. The change in sentiment was quite visible in the primary market, as at the beginning of the week, deeply subordinated European bank issues were oversubscribed by nearly eight times, but by the end of the week issuance dropped to a trickle. The Fed further eased the terms of its Main Street Lending program by increasing loan sizes, extending the term and most importantly reducing the risk for banks underwriting the loans. While longer-term trends still seem supportive, with very strong inflows being recorded across credit markets, the uncertainty around the virus situation could linger for some time.