In Japan, a strong Tankan and a new fiscal package 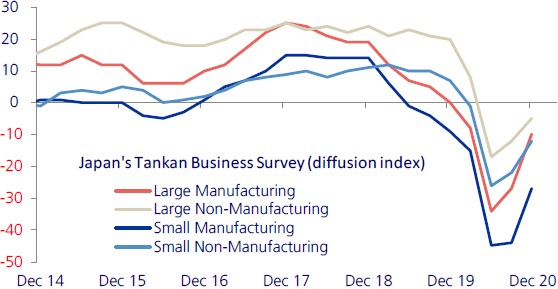 Today’s Tankan corporate survey was stronger than consensus had expected. Business conditions at car and precision instrument manufacturers are particularly buoyant, while the outlook for capex and employment is less cheerful. Even though the corporate outlook is encouraging, domestic consumption is likely to take a hit amid record high infection rates as the third wave of COVID-19 rattles the country. The Eco Watcher’s outlook index surged from 16.6 to 49.1 between April and October but slumped 12.6 points back to 36.5 in November.

The government took the right measures last week to counter any weakness in demand by announcing a third economic support package worth JPY 73.6 trillion, or 14% of GDP. As always when these headline grabbing numbers are announced, our focus is on the fresh fiscal spending impact, called ‘mamizu’. This ‘fresh-water’ spending sums up to about JPY 32 trillion, a notably smaller, but still respectable amount, which will be financed by the third supplementary budget, the FY2021 initial budget and local government budgets. We applaud the fact that spending is not purely helping consumers, employees and firms to overcome the pandemic, as in the first two emergency packages. The focus is on PM Suga’s new growth strategies in the fields of digital transformation, regulatory reform and decarbonisation.

The last few days have seen some positive developments in Eurozone policy making, though of course challenges remain. The ECB announced a EUR 500bn increase to its Pandemic Emergency Purchase Programme
(PEPP) extending it to EUR 1.85tn, and it also extended the duration of the programme from mid-2021 to March 2022.  ECB President Christine Lagarde indicated that their best estimate is that the pandemic will be effectively over only by the end of 2021, and hence support will still be needed through all of next year. Admittedly, Lagarde’s comment that the envelope might not be used in full was probably not helpful, but overall, it was encouraging to see the ECB confirm that monetary policy would continue to support the economy and Eurozone government debt issuance for more than another year. It was also confirmed that the EUR 750bn Next Gen EU initiative would be operational next year as last-minute objections from Hungary and Poland were overcome and a compromise agreement with the rest of the EU members was reached.

US: Initial jobless claims rise to the highest since September

The S&P 500 receded by 1% last week on increasing signs of weaker economic momentum in the near-term and the lack of progress on further fiscal support measures. The Nasdaq 100 shed 1.2%, but small cap stocks bucked the trend with the Russell 2000 gaining 1% to reach a new record high. The move came despite small firms becoming more cautious with regard to the economic outlook as indicated by the latest NFIB small business optimism survey. Not all components were weaker, though, as hiring intentions ticked up and higher prices are in the pipeline, indicating a pickup in inflation in the months ahead. The latest inflation report shows that headline CPI remained at 1.2% YoY in November while Core CPI stuck at 1.6%. As indicated last week, the drop in initial claims was distorted by the Thanksgiving holiday. The latest figure shows a marked acceleration to the highest in three months reflecting the near-term headwinds caused by the surge in new COVID-19 infections and related shutdown measures.

European bond yields fell sharply last week, reflecting a lack of progress on Brexit negotiations and concerns around virus infections. The 10yr gilt yield slumped from 0.35% to 0.17% on the week, as fears of a no deal outcome intensified, while Bund yields fell to the lowest level since early November—prior to the first batch of positive vaccine news. US Treasury yields held up better, despite the lack of a breakthrough on a fiscal package, but inflation expectations edged down and the 10yr yield retreated below 90bps. Brexit negotiations will be decisive for the near-term outlook for European bond markets. A failure to reach a deal would trigger another leg down in gilt yields as additional BoE policy measures would be forthcoming, with spillover into the rest of Europe. Negotiations have been extended, however, with further attempts to reach a solution, which would benefit both parts. Elsewhere, peripheral spreads remain contained, helped by supportive ECB policy, and last week saw the 10yr Spanish government bond yield turn negative for the first time.

China: Trade surplus surges to a record high, while the credit impulse is topping out

China’s November exports surged as demand for Chinese consumer goods remains brisk particularly in the US and Europe. Even though China’s import demand remains solid, the trade surplus ballooned to a record high. Meanwhile, there has been talk about ‘dual deflation’, as consumer price inflation fell into negative territory in November for the first time in over ten years while producer price inflation remains stuck in negative territory. We do not believe that the PBoC, China’s central bank, is too alarmed as the negative CPI print has been mainly impacted by the drop in pork prices and lower energy prices while core inflation remains positive. Finally, China’s aggregate credit surged in November. However, we do not want to step into the trap of only looking at the change versus last month but prefer to look at the year-on-year comparison. Even though aggregate financing remains strong at 13.6% YoY, the credit impulse to the economy seems to be topping out. Corporate bond financing and shadow credit weakened, most likely reflecting fears of weaker demand following recent bond defaults.

As expected, the BCB kept the policy rate at  2%. They also maintained their forward guidance that monetary stimulus would not be reduced as long as inflation forecasts for 2021 and 2022 are sufficiently close to the target, long-term inflation expectations remain anchored and the current fiscal regime does not change. Even though these three conditions are currently met, the statement was more cautious on inflation evolution due to recent higher than expected inflation. In November, inflation continued to accelerate, reaching 4.3% YoY, above the BCB target. In the communiqué, the BCB stated that if inflation expectations converge to the target, the forward guidance may soon no longer apply, which does not imply interest rates will rise immediately since economic conditions still require a strong monetary stimulus. In Chile, the central bank also held the monetary policy rate at 0.5%, maintaining the unconventional measures currently in place. They expect to keep the policy rate at this level for most of the policy horizon. Inflation decelerated from 3% to 2.7% YoY in November.